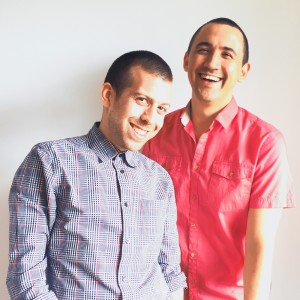 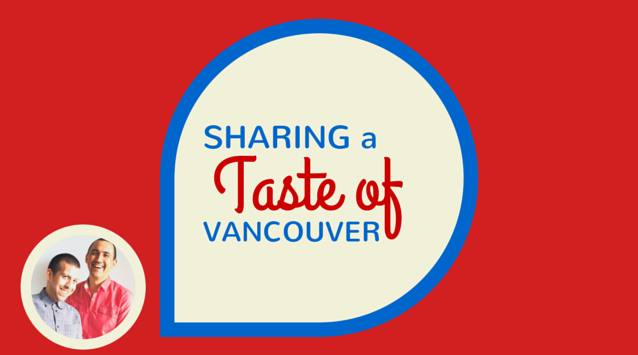 Adrian and Jeremy love food, photography, and social media. And on their website, The Food Gays, they share healthy and tasty recipes as well as food news in and around Vancouver, BC, Canada.

I am so happy to have Adrian Harris and Jeremy Inglett of The Food Gays on the show today.

(*All images below are Adrian and Jeremy’s.)

Adrian: We met I think maybe close to six years ago.

Jeremy: Yup, we met through a friend.

Adrian: Through a mutual friend at a random party that neither of us were planning to go to.

Adrian: And we didn’t really know anyone there other than the host. So yeah, we kind of just gravitated towards each other, and we’ve been hanging out and . . .

Jeremy: Doing our thing ever since.

On Collaborating on Their Blog: 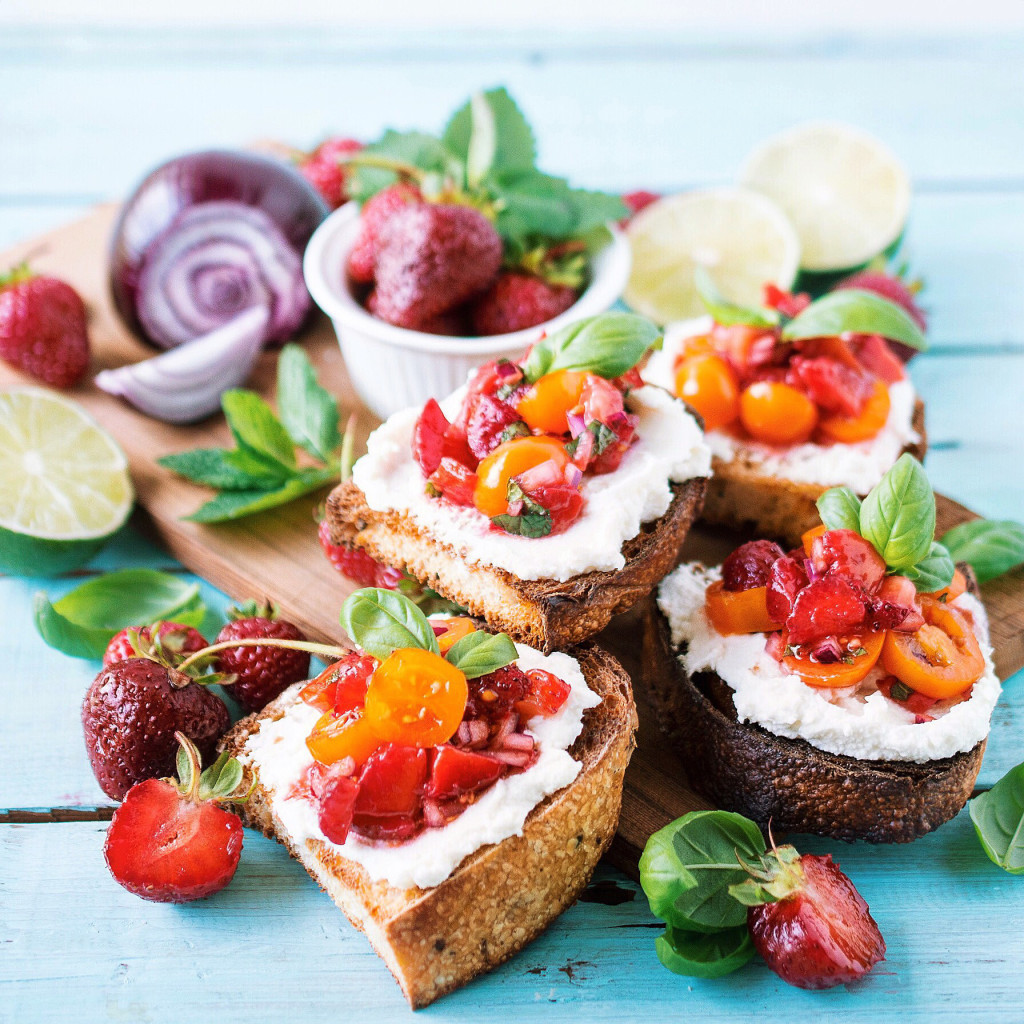 Jeremy: So it was probably July of 2012 when we decided to pursue the food blog, not really knowing what we were getting ourselves into.

Adrian: We were just wanting to find a hobby to do together, something fun. I was blogging previous to this, doing a fashion arts kind of blog, and I think Jeremy was tired of me being on the computer all the time. So we thought we’d put our heads together and was like, “What do we both like?” And we were already cooking a lot at home and doing that, so we just started it not really knowing what was going to become of it, just something fun to do as a hobby.

Jeremy: Baking is kind of a specialty. So it just goes back to my roots. My grandma used to be a baker, and there are probably three or four other bakers in my family too. So it’s just in the family, and I feel comfortable with it.

Adrian: I guess I’d always been cooking too. Even as a little kid, I was in the kitchen making weird snacks and that kind of thing, left to my own devices probably a little too much. But I never ever thought that we’d have a blog, that it just started really organically. Neither of us had any sort of preconceived notions of . . .

Adrian: Yeah, it’s really evolved a lot from three years ago, for sure.

Adrian: We don’t really have anything set in stone, but we’ve, I guess, gravitated towards what . . .

Jeremy: we enjoy most.

Adrian: Or what each other’s strong suits are. So Jeremy’s definitely a lot more about the analytics and the planning and . . .

Jeremy: organizing and making sure things are up.

Adrian: And I’m probably more gravitated towards the styling and photography.

Jeremy: And then we work together on recipes and in the kitchen, so it’s intertwining. It’s a good nest.

Adrian: We pick up where the other leaves off. Because it’s hard, right? Being a blogger . . . We don’t need to tell you. It’s like there’s so much involved, and you don’t necessarily think of all of that when you’re first starting.

We definitely worked our way through it.

On Deciding What to Make for the Blog:

Jeremy: Depends on the season.

Adrian: Yeah, nowadays probably, it’s really seasonal for us. We cook a lot with fresh plant-based ingredients, I guess you could say, so what’s fresh at the market. I really love farmer’s markets and going at least once or twice a month and getting inspired…

Jeremy: Sometimes once a week.

Adrian: Well, depending on what we can afford. But I don’t know. I guess before we were very much just cooking . . .

Jeremy: to experience cooking and to get to do that.

Adrian: I guess now we are probably trying to be more creative and inventive with flavor combinations and what can we come up with and that kind of stuff.

On Their Blogging Process:

Jeremy: First, create, of course. I think I’ve tested out a few things over the couple of years, but I think right now we’re doing the Instagram test first.

Adrian: Yeah, a lot of times, we’ll post stuff to Instagram now because that’s where we really put our primary focus in the past few months. So we’ll put something up and if it gets a lot of interest, then we’re like, “Okay, that’s definitely worthy of a blog post,” and we’ll then go to the next steps.

But generally, if we do post our recipe to the blog, we’ll try to have tested it a few times at least and make sure it’s a solid recipe because that’s important too, that you’re putting something out there that’s going to work for people. But it’s different every time, I guess.

If we were doing it, say, for a client or something, if it was a sponsored post, then there would be a lot more involved time-wise.

Adrian: I really focused a lot in the last few months practicing, and Jeremy definitely is very important part of the process though. He’ll tell me if something’s not working or if I can’t figure something out.

Jeremy: “Do this there. Try this.”

Adrian: Or use his hands a lot in the shots.

On Misconceptions about Healthy Food and Healthy Eating: 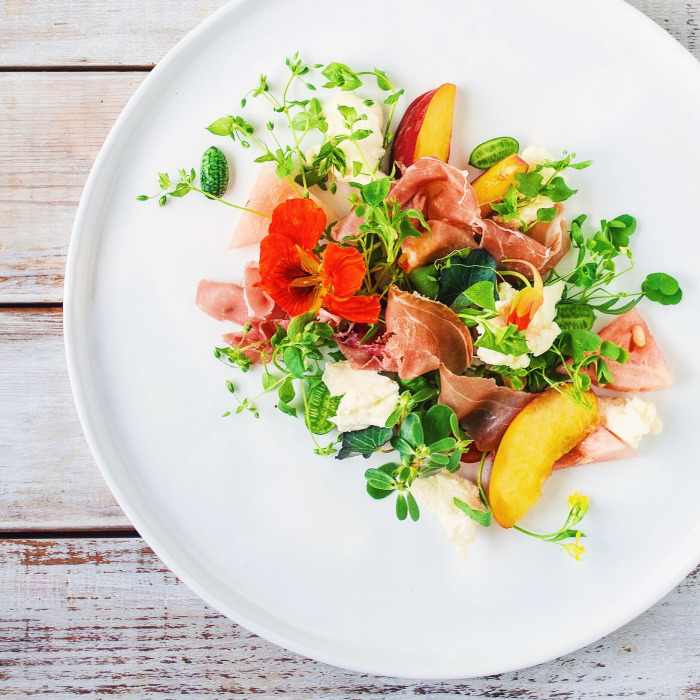 Jeremy: That it’s all green and boring.

Adrian: We really try and show people that it can be fun and that you can really make fun interesting things and use new ingredients. I think it can feel really limiting for people.

We’re not vegetarian, and that’s why I think we can have so much fun with it. But for those who are and who have food allergies and limitations that way, it can feel really like the same thing. I think you can get into a bit of a food rut. So, yeah, I think that’s our biggest thing, just that it can be different and you can have fun with it and have great, amazing flavors.

Adrian: And get to know your farmers too because that starts to inspire you too.

Adrian: I’m talking about her flowers all the time.

Jeremy: Well, eating-out option is kind of hard in itself.

Adrian: Yeah, I think eating out can be a challenge.

Jeremy: You’re not gonna go out and buy a nine-dollar salad when you can easily make a three-dollar salad at home and that can fill you up.

Adrian: I think pick your splurge moments, I guess. We definitely eat junk food, and not everything that we eat is on Instagram. And then we have just regular routine meals and stuff.

Jeremy: But just incorporating it into your routine is just a good way to do it.

And cut down on your meat. That’s something that we’ve done a lot. We love protein still, and we’ll eat it maybe a few times a month now, as opposed to it being like it felt like it needed to be every single night of the week. That, with the side of your vegetables.

If you shift your focus . . . And I think cookbooks. Cookbooks and blogs, that’s a really great way because a lot of the work is done for you. You don’t need to sit and worry about trying to come up with something super creative. Just go online and find it. Someone’s done it. Try it out.

On the Food Culture in Vancouver, BC Canada: 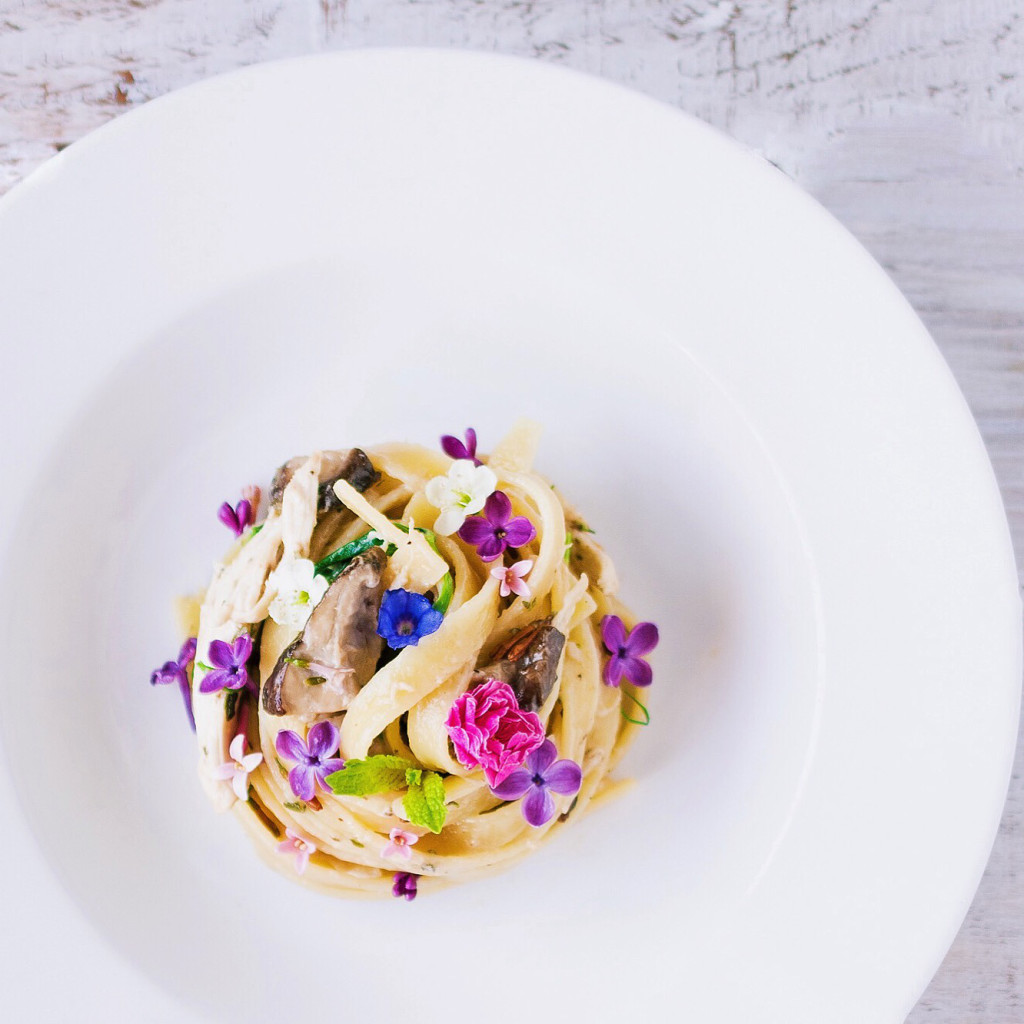 Adrian: You can probably find a little bit of everything here. For someone who’s really well traveled, maybe Vancouver still has a lot of growing to do, but in a lot of ways, if you’ve been here or if you’re from here, you know it’s a bit of a small town. So in that respect, we do have a lot of options, and we’re spoiled.

Jeremy: There’s still a lot of restaurants that we have never been to.

Adrian: People ask us where we should go eat, and we’re like, we haven’t dined out probably, nearly . . .

Jeremy: as much as we used to.

Adrian: Yeah, nearly as much as we used. Can’t keep up. It’s like a full-time job.

On Breakfast, Lunch and Dinner in Vancouver:

It’s a good solid spot. Go early so you’re not waiting in line for too long. But they do a really good breakfast.

Jeremy: Lunch, there’s this really cute spot, Japanese spot, Basho Café. They do these lunch sets, so you get three little pastries, or two pastries.

Adrian: Yup, and some soup.

Jeremy: A lunch bowl and a soup and a drink.

And we live in the distillery and brewing district of Vancouver, so there’s literally within a 15-minute walking span four or five different places that you can go drinking.

Adrian: I’m sure you probably know about a lot of them, but stuff we love, Feed Feed, that’s a really great place for just dinner inspiration. Artful Desperado, yeah, we love him. And then we’ll give Baked a shout because we just started contributing for Baked, the blog, so that’s a really good baking website.

Adrian: Yup, Dennis Prescott, for sure. Again, Feed Feed for sure, Artful Desperado, Molly Yeh, I am a Food Blog, Vanilla and Bean…

Jeremy: Just to name a few.

Jeremy: Ironically, the appliance we didn’t use for maybe two years, which we’re now using almost every other day.

Adrian: And we just got it and we never used it, and then it sat there for literally two years. We finally figured out how to use this scary-looking object, and yeah, it’s really great.

Adrian: We make dog food for our dog, so we have to steam vegetables.

Jeremy: It just keeps all the nutrients in the vegetables that we’re cooking for him and because we only feed him real food.

Adrian: Mine would be cilantro.

Jeremy: Blue cheese for me. It was too pungent to eat before, but now I can just eat it, no problem.

Adrian: Yeah, Jeremy has a lot of books from school, and then we’ve got this Seven Spoons cookbook. We haven’t cooked from that yet, but it’s a really beautiful one. We actually laid off the cookbooks in the last few months because I kind of went a little crazy.

It’s such a good song. They just released the album. It’s very good.

On Keeping Posted with The Food Gays:

But Twitter, Facebook, we’re pretty much on all three, and we’re trying to post more recipes to the blog. So definitely, check us out there more, where you can expect more recipes this summer.